Home Safari A place for primates 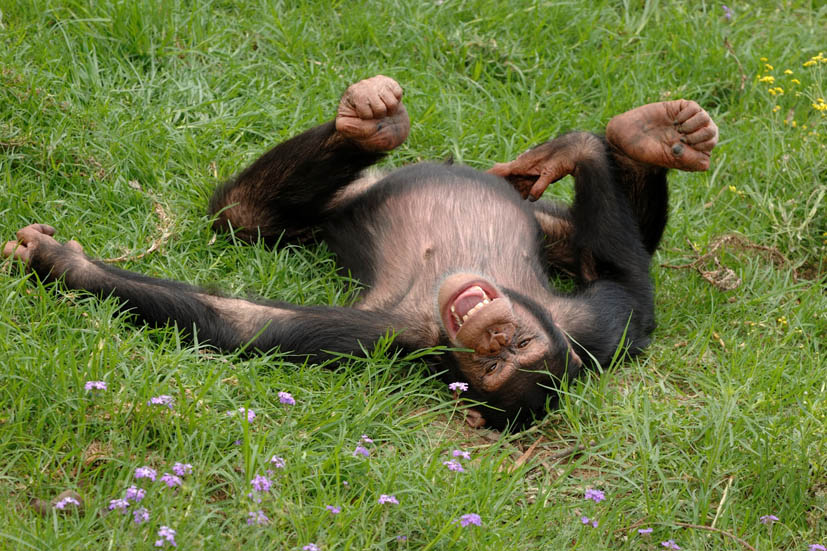 Call me curmudgeonly but the words budget and safari go together like Julius Malema and understated charm. For a nominal fee that included breakfast and dinner, my husband and I checked into Nkambeni Tented Lodge at Kruger Park’s Numbi gate.

The brochure promised the “sights, sounds and smells of unadulterated nature” so my hopes were high. Alas, within minutes of arriving I yearned for the relative calm of our suburban house alarms, rather than the noisy buses off-loading Italian tourists and a quad-bike that puttered up and down the small dirt road – delivering luggage apparently.

Rows of raised tents offered two beds and foldaway bunks for children plus indoor and outdoor showers. Oh, and a Jacuzzi on the small wooden deck in front.

The place was packed. A family with fractious brats on our left, a middle-aged British couple enjoying their noisy jet bath – “Luvverly, pet! Aye, just there!” – on our right. High-pitched giggles ensued, not unlike jackals in the height of the rut.
‘Pass the binoculars,” I ordered, hoisting up the reed blind and peering out.
“You don’t need them,” said my spouse.

Quite right, I didn’t. The wooden decks were about as private as a TV reality show. I let the blind fall and groped for my specs. Dear me!

“Well, they are British,” reasoned my husband. “And this isn’t Dubai.”

Even so, the KNP needs more Jacuzzis like a giraffe needs more party balloons. Perhaps that explained why we never saw much game, apart from four kudu and a white rhino feeding on the thick Pretoriuskop sourveld. In the distance, a lone elephant bull uprooted a small tree and flung it down again.

To be fair, staff members were perfectly charming and the buffet was okay, except for the inedible yellow slop masquerading as mustard sauce.

When you can’t look at another primate of the yammering tourist variety, Jane Goodall’s Chimpanzee Eden, close to Numbi gate about 10kms outside Nelspruit, is worth a visit. Overlooking mauve mountains, the forest-shrouded sanctuary offers a home to 30 chimps, each with a history of abuse, cruelty and neglect. Two youngsters stroll around their enclosure, long hairy arms entwined, like love-struck teens on a date.

“Hullo Amadeus,’ says a keeper to a hulking male. “Want some paw-paw?”

The great ape nods and holds out a meaty hand. The keeper throws a slice over the fence and he catches it as deftly as any professional cricket player. “Being the alpha male, he has to eat first,’’ she explains. The females prostrate themselves before Amadeus before scampering after the fruit the keeper continues to fling over the fence.

Of course, for the undisputable alpha male, look no further than a Sabi-Sabi game ranger. Forget tight khaki shorts and beefy thighs, see how his fingers rest lightly on the butt of his hunting rifle as he works that funky bush radio patois.

“Lion indoda static under isihlahla? Copy that! Gonna jigga east of the Black Mamba, landela for a better visual, then make my approach.”

Richard De Gouveia replaces the crackling two-way radio and flashes a heart-melting smile. Husband notwithstanding, I’m smitten. Two other female primates in our eight-strong troupe seem equally enchanted, but they’re American. That gives me the edge, I figure, being better versed in the bushveld argot than they. Indoda, I know, means male, isihlahla means tree, and landela means to follow tracks.

“We’re off to find a male lion under a tree,” confirms De Gouveia.

“Awesome,” enthuses one of the women. “In Kenya last year we saw a whole gaggle of baby lions. The cutest things in the world.”

“Mmmmm,” muses her friend: “A bunch of lions is cool but that rhino cub yesterday was something!”

I record the dialogue in my notebook with bitchy footnote: “Mistress of the mixed metaphor laughs orgasmically to attract attention of alpha male. Pride of geese, anyone?”

As De Gouveia steers the open Land Rover over bumpy terrain, Ben Ndlovu, our tracker, keeps his eyes peeled for game. The other males in the troupe seem sullenly subservient, like bachelor impala with zero prospects of defeating the alpha ram any time soon.

Ndlovu points to the left. Prowling through the bush like Paris Hilton on the make is a spotted hyena. A cat? A dog? Actually, it’s a mongoose if you go by the DNA stranding. Who knew? The hyena suddenly slopes into the long grass. The reason for its abrupt departure becomes apparent. On a termite mound in front of us a lion peers into a tree.

He’s been kicked out of the pride, though not without a fight, judging by the scars on his face. This, coupled with a limp, has meant little food for him – grazing waterbuck seem unfazed by his presence – but his luck is about to change. With eyes raised heavenwards like a supplicant, he scales the branches, snatches an impala carcass stashed by a leopard and settles down in the long grass with his prize. Bones crunch between massive jaws.

Later that evening, at Little Bush Camp’s open-air boma, privileged primates devour four-courses under a diamond-studded sky and gibbous moon, yellow as a hyena’s eye. Glass-fronted bathrooms, flickering hurricane lamps, unlimited sherry coupled with nocturnal grunts and shrieks make for an unsurpassed “me Meryl, you Robert” encounter. I can’t help comparing human mating habits with those of other Kruger inhabitants – the male leopard tortoise that bumps the female into submission; the giraffe that swills the urine of a potential conquest around his mouth like a wine taster at Spiers; the rhino that kicks apart and then sniffs his girlfriend’s dung to check her estrogen levels.

My heart hammers at the promise of intimate encounters with Africa’s wildest creatures; the prospect of happening on humping hyena or bathing elephants. Perhaps that’s what makes Sabi-Sabi in the southwestern Kruger Park a natural home to one of the world’s most prolific species – the honeymoon couple. All those predators, stalkers, and rutting beasts provide the perfect post-nuptial ecosystem. 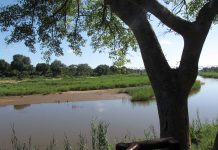 Parking off at Kruger!