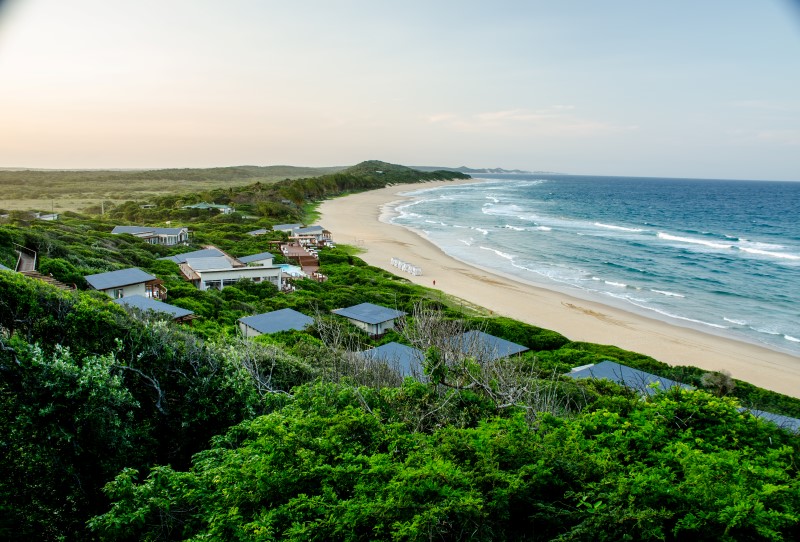 Mozambique is one of those countries I’ve always wanted to visit. It’s close to home and I’ve only heard good things about the waves, the people, and the food. Luckily, working as a motoring journalist often takes you to places you’d never normally have visited such as the magnificent White Pearl Resort at Ponta Mamoli.

Ponta Mamoli is situated on Mozambique’s southern coast, only 25 km from SA’s Kosi Bay border post – not far, but getting there can be tricky. You need a capable car and the new Toyota Hilux was our chariot to paradise. As soon as we crossed the border, tar turned to sand and after about 40 minutes of bouncing around in the dirt, we arrived.

The White Pearl Resort is a luxury beach resort. All you have to do is show up and relax. It’s spectacular! Private units are nestled amid the lush subtropical vegetation, all with dream views of the ocean. Each unit has its own private pool, an outdoor shower and a personal butler. What more could you want?

We had nothing else to do but make the most of our two days at the White Pearl. There’s a diving centre on site, and other activities such as ocean safaris, horse riding, kayaking, snorkelling and surfing.

We did them all.

The food is divine – breakfast, lunch or dinner – from Eggs Benedict or succulent Mozambican-style piri-piri chicken. A well-stocked beach bar takes the edge off the humid weather and can keep you liquored up all day. When at the White Pearl, call the barmen over and order an R&R, a refreshing fusion of locally made Rhum Tipo Tinto and Sparberry soda. Obrigado!

The coastline at Ponta Mamoli is rich in ocean wildlife. Between November and February each year, Loggerhead and Leatherback turtles come ashore to lay their eggs. Under constant threat from humans, both species are endangered. The White Pearl Resort, along with the Southern Mozambique Marine Turtle Nesting Monitoring, Tagging and Conservation Programme, are involved in conservation efforts to ensure the future of these peaceful sea creatures.

The White Pearl’s guided Turtle Walks along the coastline to educate people about the plight of turtles is highly recommended. If you are lucky, you might see a turtle laying her eggs, an increasingly rare sight.

The other thing that struck me about my short stay in Mozambique was the people. Every local I interacted with had a big smile on their face and friendliness was the order of the day. That’s pretty rare too by South African standards, too. Many of the locals are poor but choose to be happy and friendly. That’s refreshing and there’s a lesson in that for all of us. BA ‘nose’ how to help