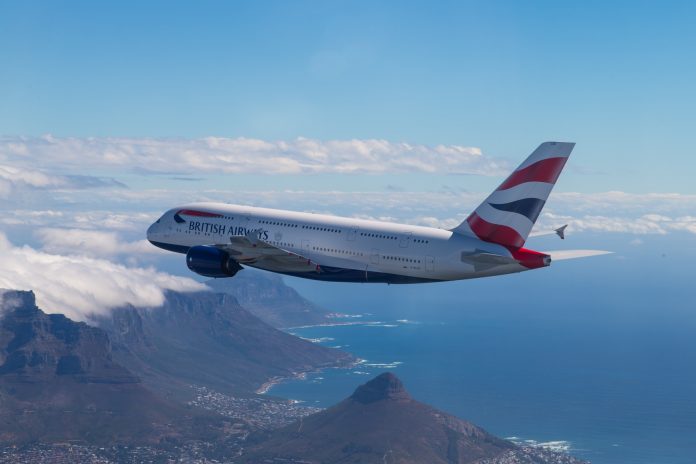 British Airways has announced a second increase to its South African services, adding three more flights between London and Cape Town for summer 2021. The three new services will start on  March 30 and will operate until April 19.

The news comes a week after the airline announced it would increase its services from Gatwick to Cape Town from three to five a week from January 2021.

“Cape Town is always one of the most popular routes in our network, particularly early in the year as people in the northern hemisphere seek to escape the cold and enjoy some time on the beach in the sunshine,” says Cristina Graham, British Airways corporate commercial manager in Southern Africa.

“The capacity increase is also good news for Capetonians wanting to travel to the UK, Europe and the United States as it gives them more choice and flexibility.”

British Airways is the only airline to offer year-round direct services between Cape Town and London.

As well as the additional peak season flights to the Mother City, it also flies twice daily between London and Johannesburg. There are also three weekly direct services between the UK capital and Durban.

The schedule increase comes as British Airways rolls out a £6.5 billion, five-year customer investment plan. As well as taking delivery of 73 new aircraft, it is also refurbishing its long-haul cabins, so they look and feel new.

The fresh white headrest covers, a new look bright blue cushion with a classic herringbone design and a new blanket in a super-soft fleece material will help customers to settle in and get comfy.

Blankets that are being replaced will be donated to charities and projects in the UK and overseas.

Carolina Martinoli, British Airways’ Director of Customer experience, said: “We want our customers to be able to sit back and really relax on board, making the most of the comfortable new soft furnishings, the in-flight films and programmes and the four-course World Traveller menu.  Our aim is to deliver them to their destination feeling refreshed and feeling their trip is off to a great start. ”

These additional changes to the World Traveller offer follow a long list of other recent investments for customers including  73 new aircraft, the refurbishment of the airline’s long-haul fleet with new cabins so they look and feel new, redesigned lounges, new dining across all cabins, new bedding and amenity kits for First, Club World and World Traveller Plus, the best quality onboard WiFi to every aircraft and providing access to power at every aircraft seat. The airline recently introduced its Club Suite, a new business class seat with direct aisle access on its A350 aircraft, which will be rolled out across the British Airways’ long-haul fleet.