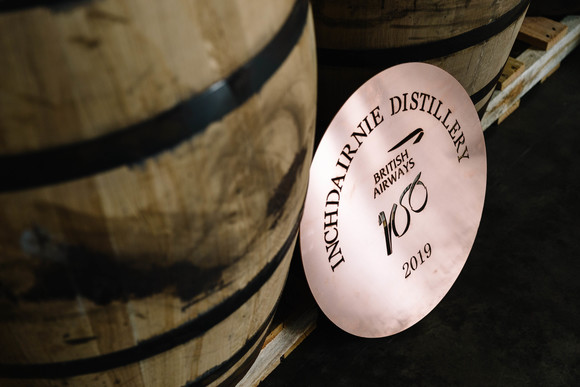 Hot on the heels of the introduction of their limited-edition, security-friendly 70g jar for Marmite addicts, British Airways is now collaborating with InchDairnie, the modern Scottish distillers to create a limited-edition pour that will culminate with a centenary dram being served up in 2031. British Airways joined the expert distillers at the Fife based distillery to mix malted barley, water and yeast before distilling and pouring it into a bespoke American oak cask once used to mature bourbon.

Kelly Stevenson, British Airways’ Wine and Beverage Manager, said: “We’ve combined InchDairnie’s modern and innovative approach to whisky distilling with our own touches.  In years to come, our customers will be able to enjoy it from the comfort of their seat. We know it will be worth the wait.”

Earlier this month , following data from London City Airport, that Marmite was the most confiscated branded food item at airport security, British Airways launched a special edition Marmite jar that at 70 grams can safely be taken through security as it falls within the liquid restrictions.

Hamish McVey, British Airways’ Head of Brand and Marketing, said: “In our centenary year we will have even more brands alongside Marmite for our customers to enjoy.”British Airways will be releasing a series of centenary editions in partnership with British brands during its milestone year. Partnerships include Scottish beer brewers, BrewDog, and luxury British watchmakers Bremont