First discovered in South Africa in 2017, the invasive polyphagous shot hole borer (PSHB) beetle from Southeast Asia is destroying many of South Africa’s most beautiful trees and ancient forests. The female infests trees with a fungus that feeds the beetle and kills the trees

The borer beetle has devastated gardens, parks and urban forests in Durban, Pietermaritzburg, Bloemfontein, Ekhurhuleni, Sandton and Sedgefield. Alarmingly, the PSHB beetle is also penetrating into the indigenous forests of Durban, Knysna and George.

So far only Limpopo remains unscathed while the list of infected trees is ever-expanding, some of the most susceptible being American sweetgum, Japanese maple, Chinese maple, box elder and English oak.

On a more positive note, scientists have the beetle in their sights. Heather Nependa from the Department of Conservation Ecology and Entomology in the Faculty of AgriScience at Stellenbosch University is undertaking research on the pest for her doctoral thesis.

Nependa’s research site is 320-year-old Vergelegen Wine Estate in Somerset West, which has pioneered agricultural and horticultural testing since Cape Governor Willem Adriaan van der Stel established it as a model farm in 1700.

This suits Nependa, as the history and biosphere of Vergelegen are “a microcosm of urban and peri-urban areas in South Africa, which allows for extensive research on the beetle and its potential impact on the country.”

The PSHB Research Network first confirmed the beetle on several tree species in Somerset West in April 2019. Vergelgen Estate’s strict measures to avoid contamination – banning the transport of firewood into the estate, installing monitoring traps and repellent, came to naught when the beetle had penetrated their defences in February this year after a hot summer boostedinfestation in the town .

Assisted by two Conservation Ecology and Entomology students, Nependa has produced an inventory of 1010 Vergelegen trees. This data, including diameter measurements of each tree and its reproductive state, has been submitted to i-treetools.org.

Visitors to the estate can also spot two types of trap used to monitor and collect the PSHB. The simplest design uses one and two-litre plastic bottles, fitted with a chemical lure, tied to 1.5m steel rods. There are 50 keeping the beetles away from the trees.

The second trap has been 3D-printed and is secured over holes made by the beetles on the trees. Steel mesh is placed over each opening to stop them from escaping. All traps are inspected every two weeks and contents are delivered to the University for Inspection and identification.

“An important next step is to map out invasion pathways and determine what drives dispersal,” says Nependa. Temperature logging buttons will be placed at each of the sampling sites, to help track how climate changes affect beetle dispersal. This data will also be important for lab experiments on beetle and fungus biology and physiology.

“This will involve growing the fungus in the lab and experimenting with plant nutrients and plant volatiles to determine the criteria required for successful fungus establishment. This information will also help further model the impact and potential distribution of the PSHB. This will ideally be modelled for the greater Somerset West area to include more hosts.”

Says Leslie Naidoo: “Vergelegen has a long-standing relationship with Stellenbosch University. Like many South Africans, we are passionate about our trees and are eager to learn more about this pest and how we can stop it in its tracks.”

The project will run until June 2022. Findings will be documented and made available to interested parties via the Stellenbosch University’s Department of Conservation Ecology and Entomology. 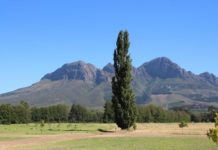