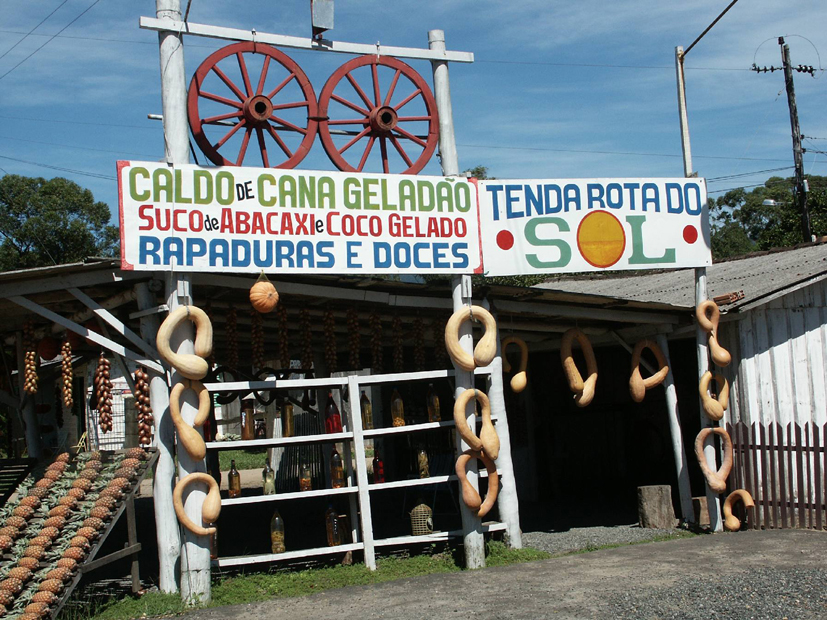 Seeking the kingdom of the suntanned revelers, my husband and I hired a car and headed northeast from Porto Alegre for Torres, 197 km away on the Atlantic Coast, passing farmsteads dozing in the morning sun and roadside stalls selling bananas, pineapples and abobora, vegetables that resemble contorted butternuts

Torres, the northernmost point on the Litoral Gaúcho, is the state’s most sophisticated coastal resort, and its beaches, Praia Grande and Prainha, are packed on summer weekends. Wealthy city folk laze about in cut-off shorts and suntan oil, jabbering into cell phones between sips of caipirinha, a white rum cocktail mixed with lime, sugar, and crushed ice.

From the 20th floor of our self-catering hotel apartment, the beach stretched out like a golden goddess. A line of surf caressed her belly as a battalion of high-rise apartments craned their necks for a view of her curves. Out on her talcum-soft sands, sun worshippers made the Baywatch cast look overdressed. Women, irrespective of weight or corporeal decay, favoured G-strings – fio dental (dental floss)– while men wore skimpy Speedos.

The only indecency here was to be untanned. Between husband´s voluminous trunks and my pale, freckled shoulders shaded by a huge straw hat, we stuck out like … well, Gringos on a Brazilian beach!

Sarong merchants hawked colourful cotton kangas, nubile teens played volleyball and the Atlantic provided sparkling respite from the heat. We spent days doing beach stuff, ergo nothing in particular, interrupted only by lunches of grilled salmon or shrimps, washed down with ice-cold Kaiser beers and refreshing Aqua de Coco from one of the tousle-thatched restaurants on the seafront. In the evenings we drank champagne from our balcony, counted star constellations and fell asleep to the soothing lullaby of breaking waves.

Twice we watched the sun rise over the Atlantic – a novelty for those more accustomed to seeing it set in Cape Town. When the orange sky turned blue, we strolled past the Morro do Farol, identifiable by its lighthouse, and along the deserted Praia da Cal, a pristine sweep of sand draped around the shoulders of a tropical bay, coming to the Parque Estadual da Guarita, one of the most beautiful stretches of the southern Brazilian coast.

The park is on a basalt outcrop, with 35-metre-high cliffs rising from the sea, offering superb views up and down the coast. At several points, steps lead down to basalt pillars and cavern-like formations etched into the cliff face. After the Praia da Guarita, another beach stretches all the way to the Uruguay border.

On the way back to our apartment, husband and I stopped at a grotto where locals had built a shrine. Flowers, candles, black Madonnas and plaques of thanks adorned the rock face above a little pool. The water here is said to be holy and people filled plastic bottles and buckets. I too filled a cup and drank the restorative liquid, but the holy water severely unsettled my stomach .

“I warned you,” intoned my husband. Yeah, yeah, note to self: only drink bottled mineral water in Brazil.

After another morning catching a few waves, solar rays and the local ice-cream vendor’s eye, we decided to return to Porto Alegre via an inland route. Passing dunes knitted together by tough grasses, we drove away from the coast, turned left and found ourselves negotiating a dirt track that plunged into dense jungle and up a steep mountain. We continued on the winding, rocky road past a few rickety shacks braking periodically for skittish marmosets scampering into the lush surrounding vegetation.

The views over the Serra Geral were spectacular: tumbling waterfalls, thickets of palm, huge indigenous hydrangea bushes, pampas grass and arboreal mountains that stretched on and on.  After bouncing along the dirt track for about two hours, we emerged at the little town of Campara Do Sul, in the opposite direction to Porto Alegre, much closer to the state of Santa Catarina.

However, with the aid of our map and gesticulating locals, we found ourselves back on a tarred road heading for Taquara, a route that provided a relatively peaceful and unexpected glimpse of rural Brazil. Mountains and jungle gave way to vast tracts of open country with colonial homesteads and sleek horses. This hinterland is home to Brazil’s vaqueiros, who lead a classic ranching lifestyle on sprawling cattle-raising farms that might more readily be associated with Argentina or Uruguay.

After driving another two hours or so, we hit a traffic jam so thick we knew we had to be close to Porto Alegre, the capital of Rio Grande do Sul. Indeed we were. Night had fallen and we had to pass the red light district to get to our hotel. Hookers plied their fleshy trade, pacing the streets like fat-bottomed beasts in an urban zoo. A tall, gender-bender in black thigh boots and hot pants brandished a riding crop. We did not stop.

In the evenings we strolled the few blocks surrounding our hotel – here boutiques, villas in faded ice-cream colours and high-rise apartments jostle for space. We saw fire-eaters and jugglers, transvestites in the local chemist, prostitutes in a bar, and a street brawl that was swiftly broken up by patrolling policemen. Outside the bar areas, the ground was slippery with beer dregs spilt deliberately. Brazilian women believe that anyone who finishes her drink will end up on the shelf!

With neither the hyped-up glitter of Rio, nor the oppressive capitalism of São Paulo, Porto Alegre is a cross between a southern European and a North American city. I wandered the streets, fascinated by crowded markets selling everything from ethnic jewellery to spells on how to win a man’s affections. (Write his name on paper, wrap it around the heart of a chicken and set fire to the lot. Mix the ashes with perfume and use the liquid to water a rosebush. Easy!)

Porte Alegre is fun to visit during the one of their festivals such as the Semana Farroupilha (Sept 13-20) with traditional dancing and singing, or the Festa de Nossa Senhora dos Navegantes in February, a procession of fishing boats.

Colonial churches abound. Most popular is the downtown Nosso Senhora das Dores where women in head scarves wash the vast flight of stairs leading up to the church every morning. Featuring Portuguese baroque and constructed in a German style, the church attracts people from all over the city.

Despite a strong Roman Catholic presence, superstitions abound in Brazil, where it is customary to pay a few reais for a coloured ribbon to be tied around your wrist. The ribbons, supposedly blessed by the church, grant the wearer three wishes. You wear the ribbon until your wishes have been granted. It’s a charming custom but if somebody touches your wrist, you could well be kissing your wallet, watch or jewellery farewell!

Brazil is the second most dangerous Latin American country for visitors after Colombia. Bus-jackings are common so the air-conditioned 12-seater vehicles touring the city have video cameras to monitor passengers. Of course, if you’re from Johannesburg, muggings and car jackings are old hat! However, I felt perfectly safe at all times, albeit aware of a strong police presence.