My first glimpse of this 13th-century city from the summit of Mount Srdj – a great place to get the lay of the land – takes my breath away. Like a scene from a dream, serpentine hairpin roads offer vertigo-inducing views at every turn.

Huge medieval walls encircle churches, monasteries, palazzos, bell towers, turrets, and marble streets, with the blue Adriatic Sea in front and the brown mountains of Herzegovina behind us.

Gobsmackingly gorgeous from any angle, everything screams “ogle me”:  the Renaissance façades, the meticulously restored Baroque, Greek, Gothic, Roman, Venetian, and Slavic architecture, the craggy white bluffs, hidden coves, and yachts bobbing in the bay.

A maritime trading centre called the Republic of Ragusa in the 15th century, now a Unesco World Heritage site, it’s small wonder the playwright George Bernard Shaw wrote: “If you want to see paradise on earth, come to Dubrovnik.”

The steps up the 2km long, 700-year-old city walls are steeper than mobile data in South Africa, which also ramps up the price of deliveries, as you can imagine. Over centuries anyone visiting the city had to bring a rock to help build the wall, fortified in the 1400s to defend against the Ottoman Turks.

As I begin the circular hour-and-a-half walk around the 22m high perimeters, ever-changing views bombard my senses. Down below, centuries of pedestrians have buffed Stradun, the car-free main drag to a smooth gloss.

Merchants lined this marble promenade in the Middle Ages, starting at the Pile Gate wall entrance; before that, it was a canal. Now toddlers chase pigeons across the cobbles and cruise ship passengers browse souvenir stalls, oohing and aahing over the secluded Franciscan monastery, handsome Rector’s Palace, and Onofrio’s Fountain where the water is still fresh enough to drink.

Orange and red roofs bear testament to the violent Siege of Dubrovnik in 1991 by Yugoslavian forces. The faded orange tiles are the originals while the brighter red ones mark the bombed-out buildings that had to be restored to glory – more than two-thirds of the Old Town. The scars from Serbian shells are still visible but on this sunny day with Monty Python’s Always Look On the Bright Side of Life blaring out from a loudspeaker near the Old Church – as good as any hymn – the war seems long ago and far away.

There’s a monument to liberty outside the tourist information office, the Museum of Croatian War Independence, and a cemetery up the road filled with touching tributes but Dubrovnik and its 40 000 inhabitants have moved on and for every stone battlement, Franciscan monastery, and historical monument, there’s a traditional wooden-beamed konoba (tavern) or raucous café serving cocktails to surfer dudes in shorts.

The best known of these is Buza, a stone terrace hewn from the cliffs outside the city walls where only a narrow railing separates you from the Adriatic. It’s a great place to enjoy an Ozujsko beer, while the Arsenal Taverna at Gradska Kavana overlooking the harbour offered delicious sea bass, “bake-it” walnut cake and espresso with “whippet cream” for lunch. Nearby, alley cats snooze on the cool stones and the air is redolent with the buttery aroma of frying fish.

Late September or early October is probably the best time to visit, after the summer crowds have gone. It’s still warm enough to swim in the blue Adriatic and there’s just a slight chill to the evenings.

When it comes to accommodation, the trick to Dubronik is to stay up or down the coast from the Old Town. We found a self-catering stone villa called Sea of Eden at Lozica, about 2km from the city centre near the 518-metre Franja Tuđmana Bridge, at a fraction of the price of a hotel. The bathroom and kitchen, with a crucifix on the wall, were small but our private patio festooned with kiwi and grape vines overlooked an uninhabited island and the spectacular coastline. A resident cat with four kittens only added to the charm.

Our host, Pero Vidojević, who was an extra in Game of Thrones – much of which was filmed in Dubrovnik – offered us some great tips on where to go and tourist traps to avoid.

It may sound a bit like a Slavic belch, but this Pearl of the Adriatic has become the world’s oyster! 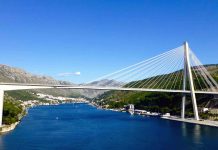