Like a conjurer unveiling ‘wow moments’ with every sweep of his cape, Henrik Thierlein is to Denmark’s capital what twinkling lights are to Tivoli in winter. Nobody’s finger is more on the pulse when it comes to the quirky delights of this compact city

Better known to the media as Mr Copenhagen, Henrik speaks about seven languages, knows all the best places to go, where to eat, and what to do. Freezeframe flashbacks of coffee and cake in Sankt Peders Bageri, champagne cocktails, gourmet food at proletariat prices in some of the city’s quaintest crannies. Sifting through blurry snapshots of fun times with Henrik and my husband help keep me sane during these dark Covid days.

Henrik epitomises elegance in a Gucci flip-flops-on-the-beach sort of way. He’s generous, cultured, aesthetically sensitive, and hilarious. One Saturday afternoon we had arranged to meet him at Amagertorv’s distinctive Stork Fountain dating back to the 1800s. Punctual to the minute, he arrived attired in Armani on a pristine white bike for rent. After a flurry of air kisses, Peter and I proffered a bottle of South African wine by way of a ‘tak for sidst’ gift.

Hastily, Henrik thrust the packet under his jacket as though it were contraband. His eyes scanned the surrounding square. Had anyone else  witnessed this furtive transaction?

“What’s with all the cloak and dagger? We’re not doing anything illegal, are we?”

He sighed. “Love the wine but we must change the packaging immediately.”

“Ag, relax, it’s very sturdy. We had all our groceries in it earlier,” I reassured him.

“That’s not the point, darling. I cannot be seen in public clutching a plastic bag like a homeless person!”

With that, he nipped into a designer boutique to procure a more suitable carrier for his wine before treating us to some delicious smørrebrød at the Europa Cafe. Just thinking about Henrik makes me smile.

For now, thanks to all the travel restrictions, I can only dream about being back in this designer city of canals and cobblestones. For more up-to-the-minute happenings in Copenhagan, Odense, and Fyn, follow Henrik on Instagram – his feed is a treat.

A few things I can recommend: 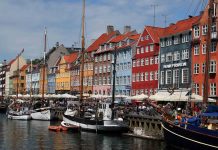 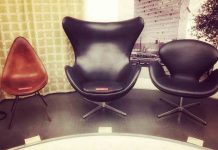