The Glacier Express tracks you at 29km/h to the heights of Switzerland’s vertiginous mountains amid green forests, turquoise lakes and rushing rapids.

It’s a Swiss roll through epic landscapes along the iron arteries that traverse the frame of this curvaceous country. If Switzerland were a woman, she’d be a mother goddess with huge breasts.

The Schweizerhof in St Moritz offered marble bathrooms and magnificent lake views, but I could have stayed longer on the train, winding through mountainous domes.

You can understand why the Swiss love their trains. Before their advent in the mid 1800s, travellers – long after Hannibal in 218 BCE – had to traverse the Alps on foot or horseback, an arduous, hazardous affair. Few of Hannibal’s elephants survived the 16-day trip.

Besides, what’s not to love? The Glacier Express, which first ran in 1930, crosses 291 bridges and chugs through 91 tunnels between the Matterhorn and St Moritz – an eight-hour journey into clouds, through pristine countryside, over roaring rivers, past towering rock walls and waterfalls.

Flowers spill over the balconies of wooden chalets. Shops, church steeples, castles, and yellow, red, or blue shutters reflect in the glass windows as we rumble on through little towns flanked by mealie fields and garden orchards. Cowbells tinkle. Crows caw. A housewife sunbathes on the grass. Sheep frolic in meadows. Village railway stations with names like Visp and Gletsch offer gateways to roads I have no time to explore.

Passing through Visp, the train visits Brig before changing direction to follow the Rhone Valley with its fir trees and rushing waters. Climbing through Betten, Grengiols, and Oberwald, the Glacier Express whistles through the long Furka Tunnel towards Andermatt for a brief stop to stretch the legs. Then it ascends towards the Oberalp Pass, the highest point of the line, before descending again towards Disentis, the historic town of llanz, the spectacular Rhine Gorge and on to Chur before backtracking to Reichenau-Tamins and heading for Hinterrhein.

The wow moment comes at the Landwasser Viaduct, between Tiefencastel and Filisur in the Canton of Graubünden when the train crosses the river that runs down from Davos. Built in just 14 months between 1901 and 1902, the limestone-built viaduct is 65m high and 136m long.

After plunging into a tunnel carved into the rock, the Glacier Express then goes through the village of Flisur before a series of looped tunnels, bridges and viaducts take it towards the village of Preda and through the long Albula Tunnel, the highest in the Alps at nearly 6000 feet. From there, it descends through woodlands and pastures until it reaches its final destination at St. Moritiz.

Huge windows enable the views to be enjoyed from the first or second class carriages along with a dining car. Staff walk up and down the train, taking orders for drinks, snacks and lunch, which comes with a great selection of wines and beers. Otherwise you can go and investigate the dining car for yourself.

We used a Swiss Flexi Pass for all our train journeys in Switzerland and flew back to Johannesburg with Swiss International Airlines. 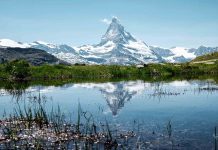