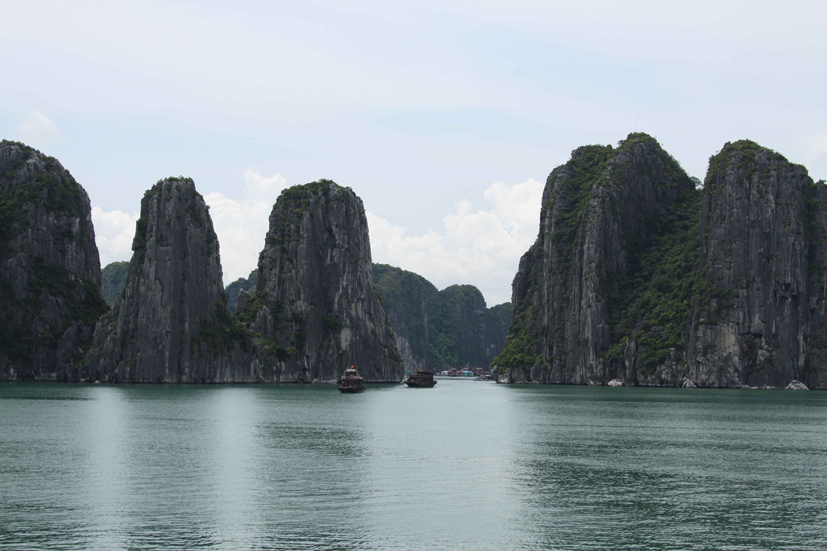 Lightning split the sky and rain lashed the wings of the plane as we broke through the clouds. Hanoi stretched out below like a verdant patchwork quilt: rice paddies, fields of rye, mealies, and matchbox houses. As we dropped closer, I glimpsed a water buffalo harnessed to a hand plough and felt the familiar butterflies in my tummy – excitement at landing in a new country or perhaps it was the turbulence.

I’d come to Vietnam to hang out with my husband on contract in Halong Bay, 170 kms east of Hanoi. Due to work commitments, he couldn’t fetch me from the airport so he’d sent a limousine from the Sofitel Metropole. The uniformed chauffeur called Tongue held up a placard with Mrs Munch written on it in large letters. Tongue is not how he spells it but then my name’s not Mrs Munch either. Whatever. Spelling’s the last thing you need worry about in Vietnam. Staying alive is of far greater concern.

Train surfing in Soweto is probably safer than crossing the road in Hanoi. From the limo I saw scooters heaving with caged chickens, a live pig, bookcases, fridges, oversized cable spools and four or five passengers (none wearing helmets) all balanced precariously on the back, front, and handlebars.

Hanoi has the highest concentration of scooters in the world – 2 million in the city’s population of 4 million people, according to Tongue, who ignored my shrieks as motorbikes skipped red lights, cut corners and avoided collisions by a hair’s breadth. Nobody paid any attention to road signs or pedestrian crossings.

Later, my husband told me to maintain a steady pace crossing the road. “They’ll see you as just another obstacle to avoid but run and you’re toast.”

The classical Sofitel Metropole (built 1901) provided a cool contrast to the high-octane adrenaline rush of the dizzying street theatre. Charlie Chaplin honeymooned in one of its suites and Graham Greene penned The Quiet American here. Barbara Bush and Angelina Jolie commented favourably in the visitors’ book. The staff – mostly women dressed in Ao Dai, long slit tunics over pants – were charming.

We spent two days exploring Hanoi’s rain-streaked streets, even trying out the Saloon 17 nightclub where the music was so loud it literally blew our hair back.

Another weekend in Hanoi, we stayed at the Hilton Hanoi Opera hotel, at a third of the price of the Metropole. Facilities included an executive suite, free wireless internet, a sumptuous breakfast, free drinks, snacks and espressos plus a superb gym.  It pays to shop around on the net before you choose.

With its gorgeous women, Vietnam is a combine harvester for the hearts of men. Several of my husband’s European colleagues had local wives, a lack of linguistic communication apparently no barrier to love. Vietnamese is difficult to master but my husband’s friend Thuy (pronounced Too-eey) taught me to say: “Bon cau bi nghet” pronounced “bonne-cow-bee-knee-yet”, which means “the lavatory does not flush”. Always a useful foreign phrase, I find.

Hanoi means “city in the bend of a river” while Halong means “where the dragon descends into the sea”. They can say a lot in a few words.

Vietnam wears its coat of communism lightly, lining it with the silk of capitalism and free-market reform although foreigners are forbidden to own property here.

I spent two weeks in Halong Bay chilling out with Thuy, while my husband toiled away. Perhaps chilling is the wrong word. So humid is the weather in July and August, it’s almost oppressive.

We’d start the morning at a little street cafe with a steaming bowl of pho (pronounced fuh), a spicy broth ideal for hearty slurping followed by sweet, syrupy Vietnamese café, a lethal combination of thick black coffee, condensed milk and ice cubes. Like pho it’s drunk all over Vietnam. Other street snacks included dried squid strung like laundry outside shops and shrimps stir-fried with their shells on, to go with Tiger beers.

Afterwards Thuy and I would hit the stores where, dazzled by bargain headlights, I bought bags, lacquered boxes, paintings and exquisite fabrics. A nearby tailor made me dresses for a fraction of what you’d pay in Johannesburg.

After some rigorous retail therapy we’d stop for lunch, usually veggies with garlic and seafood, then Thuy would drop me back at my husband’s apartment for my afternoon nap. In the evenings I’d venture out with my husband for dinner. Eat, drink, sleep and shop. Could a holiday get any better? Hell yes!  A cruise around Tonkin Bay on The Emeraude took it up a few notches.

The cruise included a visit to Sung Sot grotto, a limestone cavern with humongous stalactites and stalagmites, swimming and kayaking between monolithic limestone islands jutting up from its calm waters.

The bay was home to some of Vietnam’s earliest cultures, including the Ha Long people, and a key defense point.

According to legend, the 3 000 soaring stony outcrops were created by a dragon, said to still inhabit the waters. Fortunately we saw no sign of it while we were swimming and kayaking, though we did see a few flying fish.

Low tides revealed archways big enough for kayaks to pass into hidden lagoons once favoured by pirates and smugglers. Only the odd fishing boat rippled the calm emerald waters. Floating villages dotted the tiny shores of one or two of the islands while traditional junks with red or yellow sails shone like lanterns.

The Emeraude offered morning tai chi sessions on the top deck, but after a riotous party the night before with newly made friends from Australia and Germany, tai chi was somewhat low on my list of priorities.

Halong Bay deserves its UNESCO World Heritage listing but sadly the escalating tourism in the region has generated unacceptable amounts of litter and pollution. Here, miles from anywhere, plastic bottles, cigarette butts and sweet wrappers floated in the water and washed up on the Halong’s beaches. Sies!

Vietnam is not the only culprit.  It’s a global problem and offenders, particularly certain huge corporations, should be forced to clean up their mess. Pollution aside, though, Vietnam rocks!