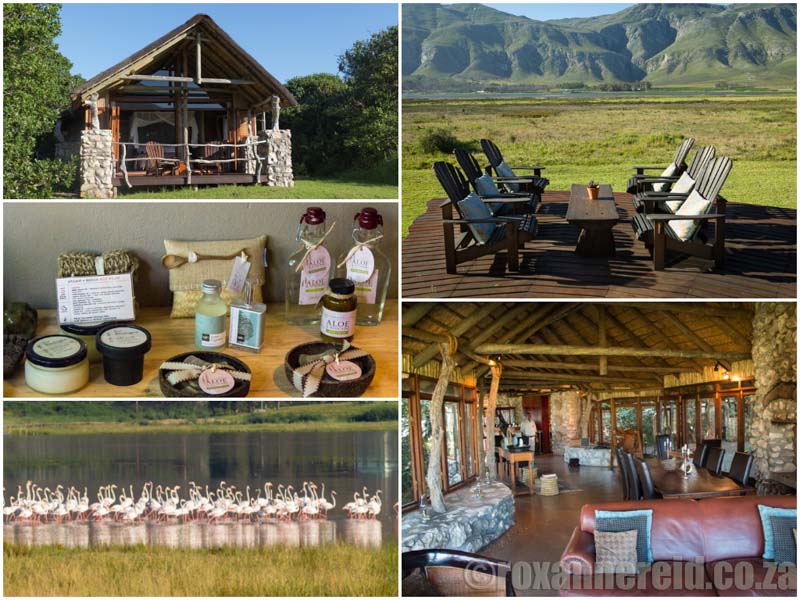 When I first heard of the Mosaic Private Sanctuary & Spa just outside Stanford in the Overberg, what caught my fancy was talk of the fynbos, the flamingos on the lagoon and the forest spa where you could enjoy a relaxing massage under the shade of the milkwood trees.

A few weeks later we found ourselves driving towards Mosaic in the heat of the day. The sun was beating down. The road was dusty. And instead of Cape fynbos, the vegetation was mostly Port Jackson and rooikrans – aliens!

Then we took the turn-off onto Mosaic’s land. It was still hot. The road was still dusty, but there were no aliens. In their place was the fynbos we’d been promised.

When I met the American co-owner Kathryn Johnson later, she was thrilled we’d noticed the change. A lot of effort had been ploughed into eradicating aliens from around 200 hectares of Mosaic’s 900-hectare property, which adjoins the Walker Bay Conservancy. By employing local labour for alien clearing, Mosaic also helps the local economy – part of its commitment to the 110% Green initiative, which aims to link sustainable, green principles with economic growth.

After a long hot day, it was wonderful to be welcomed to Mosaic’s Lagoon Lodge with iced tea and a cold cloth. I clamped the cloth to my face and neck as managers Marcelino and Simoné Henckert showed us the pool deck, spa, and dining area shaded by milkwoods.

A drive was setting out for the beach, to be followed by sundowners on a dune. Had it been whale season, we’d have joined in, no matter how tired we were. But it wasn’t (whale season is June to November), so we enjoyed a catnap under the ceiling fan instead.

You can stay at Mosaic in self-catering cottages, but our room at Lagoon Lodge – a rounded chalet built of local limestone – was fully catered. Huge double glass doors folded back to reveal a wooden deck and the Hermanus lagoon and the Klein River mountains beyond.

Little touches made it special –mosquito net over the bed, outdoor shower, huge bath and copper basin,  cruelty-free Rain toiletries for a scent of Africa, little posies of fynbos, a small bottle of sparkling wine on ice, with two flutes at the ready…

We woke in the early light next morning to a flush of flamingo on the lagoon. Hubby took a ramble along the water’s edge with ex-Zimbabwean guide Vitalis Chingwo, who told him about some of the fynbos species. They also got up close to blue crane, flamingo, purple heron, red-knobbed coot and a small gathering of Caspian terns. I sat in the cool on our deck and listened to Cape batis and white-eyes chirping in the bushes.

We met skipper Johan du Plessis at the launch site for a cruise on the lagoon with vistas of distant Hermanus, the ocean, and a flurry of terns overhead. We watched a dozen Egyptian goslings and a giant kingfisher zipping along at low altitude.

As we chugged along we snacked on fruit kebabs and muffins, lifting our binos when the bird-mad Vitalis spotted something interesting, or cracking jokes with Johan – especially when the wind picked up and our return journey turned choppy.

Instead of a lagoon cruise, you could enjoy a guided quad bike ride to learn about fynbos, birds and lagoon wetlands or indulge in a massage at the spa –indoors or out –  and there’s
lots to do in the nearby village of Stanford too. You’ll find restaurants and wineries to visit or other activities such as walking, river cruises, beer/cheese tasting and more.