Home Reviews On the Fly 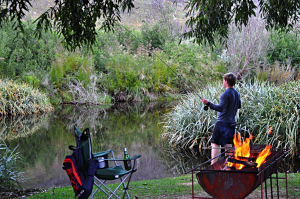 I look at Steve. He smiles. We’re on the fly. The dirt road leading to Dwarsberg Trout Hideaway is narrow with the Holsloot River sparkling below in the morning sun. Dwarsberg Trout Hideaway doubles as a wedding venue but Steve and I merely had Improved Clinch knots to tie, and after a friendly welcome we descended on Campsite 6 on the banks of the Holsloot River in the Stettynskloof Valley. A male baboon in the bush on the opposite bank fled upon sighting us. Only the sound of water trickling over rocks could be heard.

We decided to fish first and set up camp later considering that the trout would likely be off the bite in the heat of the day. I started with the Rough And Buoyant (RAB) fly, aka the Red Arsed Bastard, developed by South African angler Tony Biggs, for use in the clear streams. It is a must-have to carry in your fly-box if you plan on fly-fishing in the Western Cape.

After just five minutes on the water, with my first cast barely out, I heard Steve shout as his first trout rose and gobbled his fly. He went on to catch three more trout during the day. The hunt was on and we decided to fish the pools further downstream. The trout were breaking water and I neatly presented my RAB fly on the surface. Two seconds later my first rainbow of the day came to greet me.

The Holsloot River was clear and cold, offering pleasant respite from the mid-afternoon heat and we lunched under the shade of the trees, beer in hand, discussing assault tactics. The evening came and we were on the water once more, but this time the trout weren’t biting. By sunset, we hadn’t caught anything, even after changing flies and refining our casts. The trout had the upper hand. A warm fire and well-deserved meal was our reward and with our bellies full, we retired to our tent for some sleep.

The wild trout in the region were introduced in the 1890s. No stocking has taken place here. The specimens are small so light tackle will give you the impression of a larger fish at the end of your line, but only when you manage to hook one. The Holsloot River is born from a dam at the head of the valley so the water temperature is a couple of degrees cooler than other streams in the area, making it more fishing friendly in the hot summer months. I awoke to the sound of the river the next morning and was soon sipping on a cup of coffee checking the surface. The trout were nowhere to be seen but Steve’s snoring could be heard for miles.

When the sun kissed the mountain peaks I decided to get my line in the water. After my third cast, I felt a light tug and a nibble. I had landed my second – and last – trout of the day. The trout weren’t going to be gulled again. We fished for the rest of the morning without success. Our time at Dwarsberg Trout Hideaway had come to an end but at least we would return to Cape Town satisfied that we experienced the Holsloot River and caught a couple of the rainbow rrout that call it home.

Dwarsberg Trout Hideaway’s surrounding mountains, farmlands, and the river, make for phenomenal scenery, making it well worth a visit if you are exploring the Cape Winelands and surrounds.