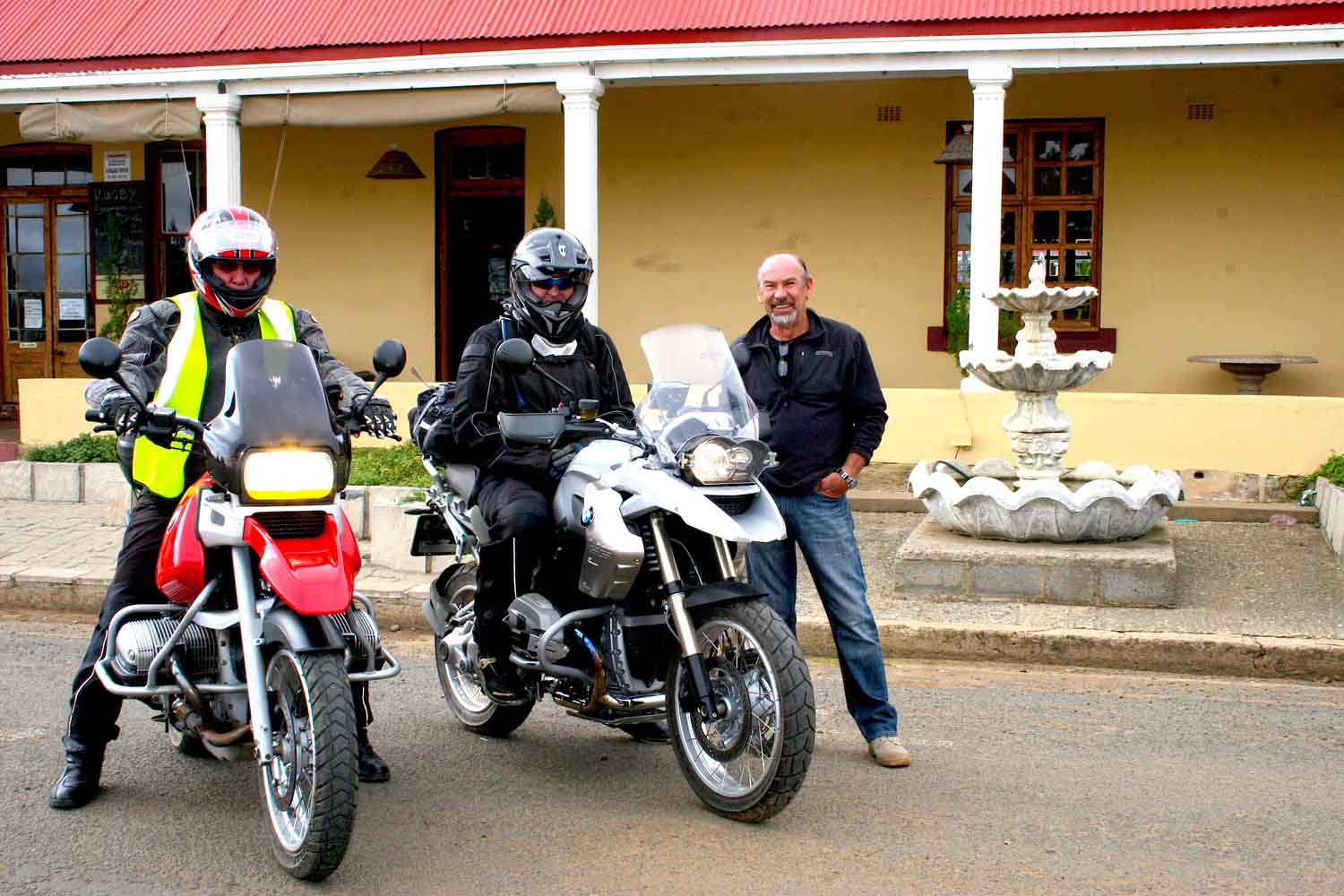 “I just got back from a great weekend with a bunch of bikers at Memel,” I told non-two-wheeler friends and the response was a bewildered “Whezzat?”

“You’ve never been to the Memel Hotel and ridden the passes around there? You cage drivers are a boring lot, hey.”

Then I explain that Memel is a small Free State town, 57km from Newcastle, KwaZulu-Natal. To get there, you take the N3 south from Joburg, turn off onto the R103 at Villiers, follow the signs saying Warden, bypass the tiny dorp of Cornelia, then head towards Vrede. With Vrede in sight you turn right towards Memel and Newcastle, and it’s about two-and-a-half hours from the Big Smoke.

After Vrede the sudden bone-jarring potholes are not to be underestimated. A bloke on a Honda CBX and I on the ancient Beemer, hit one in quick succession. I just lost my headlight, but the frame of his bike was badly bent, and the CBX had to be trailered home for stripping. A pleasant aspect of the ride is the golden swathes of light on the veld interspersed with green crops and shiny cattle. Roll mops of hay, neat farms, and prolific cosmos flowers are worthy of The Great Painter.

As I was saying before I got poetical, the owner of the 99-year-old Memel Hotel is an affable, offroad afficionado called Chris Martin. With his dynamo of a wife, the lovely Audrey, he runs a popular biker-friendly oufit. Chris and Audrey moved to Memel from Cape Town more than 10 years ago. When the beer we ordered came served in a frosted glass we knew we hadn’t fallen among amateurs, but people who KNOW.

“I have about 600km of dirt roads at my disposal, which include spectacular passes such as Colling’s Pass, Muller’s Pass, Normandien, De Beer’s and Verkykerskop,” says Chris. “I have all the info, maps and co-ordinates. I organise outrides and work out routes for the serious adventure boys – oops – people.  Riders who come here return, bringing more friends. And I can give them four different routes to get here.

“There are two ways of riding the passes. In the winter they become wet and tricky. In the summer they are hot and dusty, with stunning scenery.”

A large rumble (new collective pronoun) of Harley riders from the Clearwater Harley Club in Pretoria had also checked in. Think blinding flashes of American chrome reflecting the sun. Hokay. Once more unto the pub, dear friends – and the Memel Hotel’s pub hums on a Saturday with two-wheeler types and fresh-faced farmers, who introduced me to snuff. Whoosh! Clears the head in an instant and blasts any blocked sinuses. Being Die Vrystaat, there was rugby with a capital ‘R’ on the box. I sat at a table with Paul Neethling, the town attorney. I say: “Your surname is respected in the Cape winelands. Are you related?” “Ja jong, dis al wat daaie donders in die Kaap kan doen – net suip!” He laughed. We downed fermented malt as we cheered on the Stormers.

Straight across from the hotel is a museum and miniature library, with life-size murals on the outside walls painted by Fourie Ackerman. Inside you’ll find farm, parlour and kitchen relics, and a tribute to the almost-lost art of the blacksmith.

For those interested in military history, nearby battlefields include Blood River from the 1838 conflict with the Zulus, Isandlwana, Rorke’s Drift, Kambula and Hlobane from the Zulu War of 1979, Majuba from the First War of Independence in 1881, and the Anglo-Boer War battle of Talana Hill at Dundee. Go. Ride. See. Enjoy.