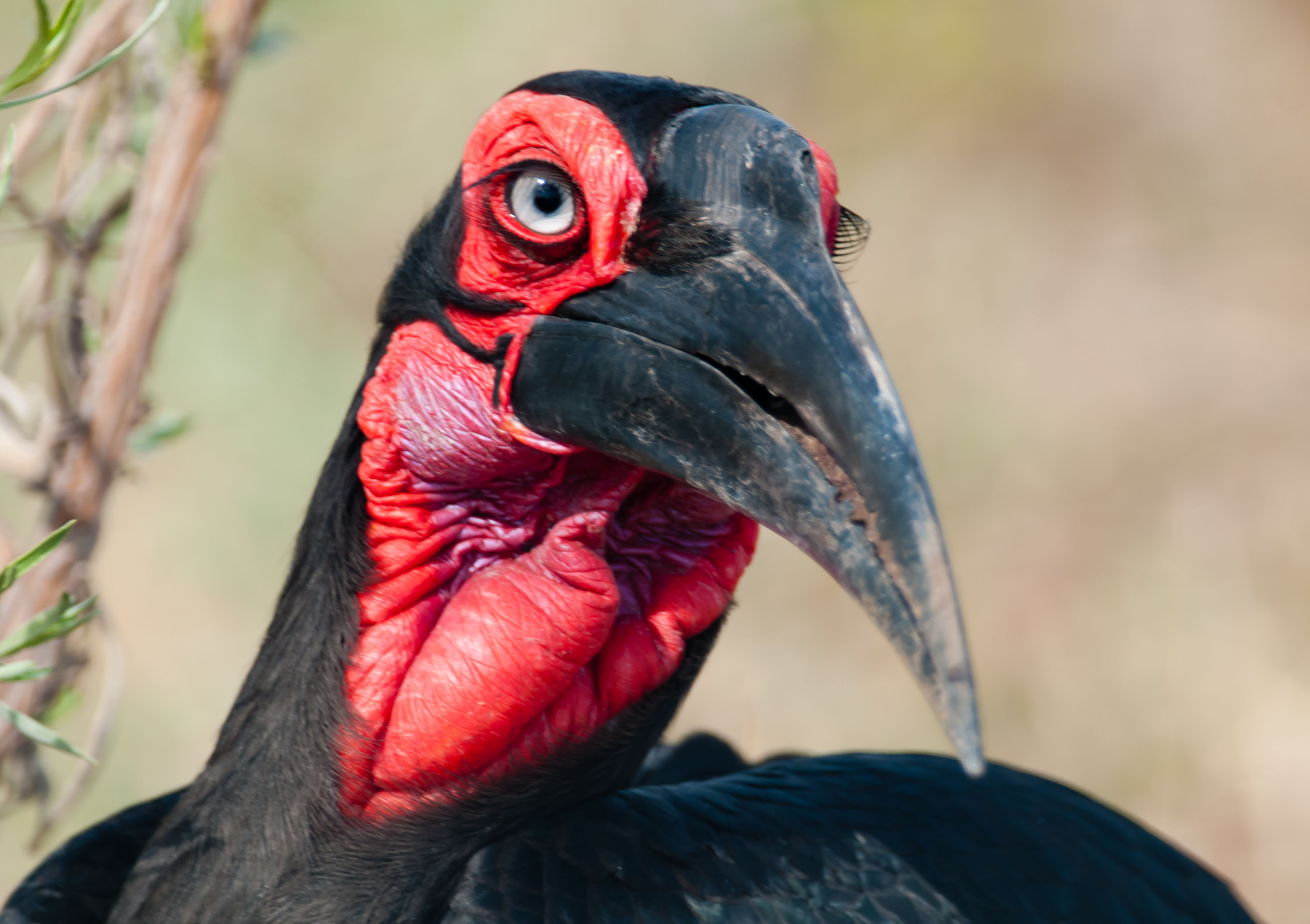 Standing solid in black with red-wattled finery, they resemble a bench of conferring bishops. Add long lashes framing pale eyes, a call like a lion blowing a trombone that can be heard 5km away; a ferocious beak that can dig deep or snatch anything trying to hide in the grass, and you understand why these majestic carnivorous birds instil a sense of awe in those lucky enough to see them.

There was a time they roamed our savannah grasslands in droves but today there are around 1700 individuals which equates to just 450 or so breeding groups left in South Africa ‒ a third within the Kruger National Park ‒ due to the urban encroachment of their habitat, the destruction of nesting trees, electrocution from transformer boxes, use in traditional medicine and ritual, persecution for window breaking, bush-encroachment, plantations, and poisoning by commercial farmers.

It took a British woman to do something about their plight. On seeing a male in captivity, Ann Turner fell in love with his long eyelashes, charismatic beak, and the swaggering panache of his stilted gait. Through her research, she met ornithologist Dr Alan Kemp, an expert on hornbills and raptors. Together they started the Mabula Ground Hornbill Project (MGHP) in 1999.

According to MGHP assistant manager, Natasha Nel, Turner saw the project through the painful early stages of learning to hand-rear and release birds successfully. Although she has returned to the UK, Alan Kemp continues to mentor the team of six conservationists including Dr. Lucy Kemp, MGHP project manager; Nthabiseng Monama, leader of an essential environmental education program for school children in areas where the hornbills still occur; and research assistants Sophie Neller, Heinrich Nel, and Patience Shito

One conservation tool involves the harvesting and hand-rearing of second-hatched chicks that would usually die of starvation but reintroduction back into the wild is a long-term process. Kruger Park data shows that only one chick is raised to adulthood every few years, with the average adult lifespan being 50-60 years.

Provision of artificial nests for wild groups and the reintroduction of these birds back into areas where they are now locally extinct, formed the basis of the MGHP project but, as Natasha Nel recounts, the team stumbled over some unforeseen complications.

“Over the past 18 years, we’ve learnt lessons the hard way,” she says. “Our aim was to reintroduce ground hornbills into areas they historically inhabited but we didn’t fully appreciate how complex their social structures are and how to replicate that. Now we know that the birds mature sexually between eight and 10 years, and that there can be only one breeding female per gang of between three and nine. The rest are mostly male offspring that help with nest-building, protecting the territory, and raising subsequent chicks, a process known as co-operative breeding.

“The female will lay two eggs within five days of each other and incubate both. The second chick is a ‘back-up insurance’ in case anything happens to the first. Usually it starves or dehydrates. We’d harvest and raise the second chick, but before we realised only one female is allowed per group – in the wild, females get kicked out of the group at a young age – we ended up with a female surplus and few places to put them.

“Today Lucy (Kemp) has learnt how to sex an egg to enable us to harvest mostly males. She puts a light under the egg in a process called candling that also allows you to determine the age of the chick. Lucy uses a tiny drill to harvest a drop of blood sent to a lab for DNA sexing. The egg can then be replaced in the nest as it’s best for the ground hornbills to incubate both eggs themselves, a 37-42-day process.

“When the second chick hatches five days after the first, we harvest it if chick one is strong, and take it to a centre such as MonteCasino Bird Gardens or Loskop Dam to be hand-reared until it’s ready for release into the wild.

“Sadly, you cannot release a bird that’s become too used to humans so ideally we want established groups of Southern Ground Hornbills to raise the rescued chicks. Right now, we are building a centralised facility to enable us to produce birds of the same quality throughout the country. We chose Loskop Dam, which falls under the Mpumalanga Tourism and Parks Agency (MPTA) because Delecia Gunn, the country’s foremost expert on hand-rearing chicks for rehabilitation into the wild, is based there. Ground hornbills are particular difficult to raise and she has perfected the recipe.

“Storm, now the alpha male at Mabula Reserve, was a poisoned bird that was successfully rehabilitated. His first mate, Kingfisher, reared with human love, was an initial success but while imprinted Southern Ground Hornbills are awesome while young, they can become aggressive when their breeding hormones kick in. Kingfisher started flying out of the nest and attacking vehicles. Sadly, she got run over but Storm is now happy with Kapama, the latest female we introduced to him.  And we no longer work with human imprinted birds as it never ends well and we are trying to build sustainable wild populations’’

I was lucky enough to encounter Mabula’s only gang of five Southern Ground Hornbills while visiting the reserve and found myself brimming with admiration for the majesty of these magnificent birds as they strode through the bush, one pausing to snatch a frog between a pincer-like beak.

They are equally adept at using their beaks to grab a puffadder or black mamba behind the head, which they carry about like a trophy before swallowing it whole like an exotic noodle. Lizards and even tortoises also make a tasty snack but all too often the birds suffer from secondary poisoning from eating a toxic carcass put out by farmers to kill hyena, leopard, and even wild dog. Tragically, this happened to a group released at a private game farm outside Thabazimbi when they moved 23km away on a farmer’s land.

Adds Natasha: “Ground hornbills are a naturally low-density occurring species needing large tracts of suitable land ‒ about 100 km2 per family group ‒ and while we do our best to monitor them, they are also strong fliers and we can’t always determine where they might choose to settle.

“One way we encourage the birds to stay within a certain area, is by putting up an artificial nesting box. A nest is vital to the group’s dynamic structure. Southern Ground Hornbills need big trees to nest in ‒ nests may even be inherited, passed down from previous generations ‒ and whether they’re being harvested for timber, lost to fires, strong winds, or knocked down by elephants, we’re losing these nest trees. We will look at the release site and mimic what the birds might have in the wild ‒ hollows in established baobabs, leadwoods, or wild figs.

“Mabula Reserve, for example, has several magnificent old fig trees but when in fruit it attracts baboons, monkeys, and other species, which is not ideal, so we used an old dead blue gum instead. We put corrugated iron around the bottom to protect the eggs and chicks from predation by leopard, honey badger, and baboons. Unlike other hornbills, the birds don’t seal themselves into the hollow. The alpha male simply lines the nest with leaves and bits of food to entice the female to spend more time in the nest.’’

The Southern Ground Hornbill is not just an icon of the African savannahs, it is culturally important too. Rural communities who traditionally use their feathers to predict rain ‒ hence their nickname of ‘thunderbird’ ‒ are now given dropped feathers so that birds don’t have to be killed. That’s where education comes in but according to Natasha, one of the biggest challenges is persuading farmers not to kill them when monetary aspects are involved. Ground hornbills are notorious for breaking windows by attacking their own reflections!

“Sometimes your heart breaks when you release a group of birds and they wander onto a neighbouring property and eat poisoned bait. It’s a terrible loss that sets us back at least three years but conservation is a crisis discipline and we all just have to keep going.’’

It’s thanks to the Mabula Project team that there’s a glimmer of light for these magnificent birds that may soon meet the IUCN Red Data List Criteria as being ‘Critically Endangered’ in South Africa if their numbers continue to decline.