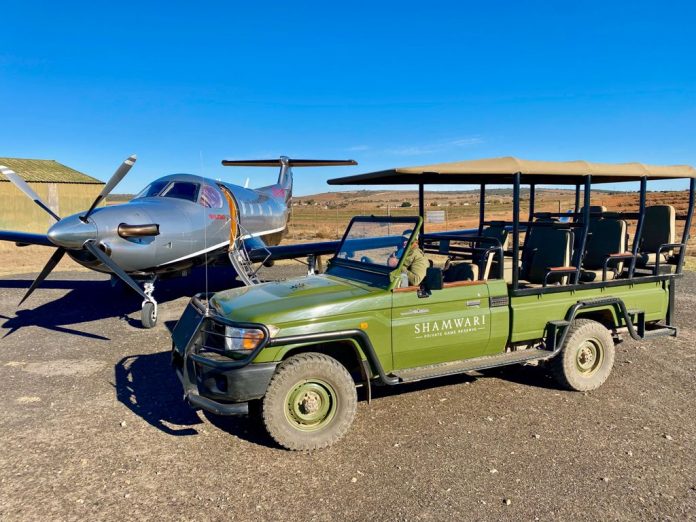 Joe Cloete, CEO at Shamwari Private Game Reserve says there has been an increase in parties chartering flights to visit the reserve.

“All the bureaucracy,  the worry about getting trapped somewhere if regulations suddenly change, and some good offers at premium game reserves is driving demand,” he says.

Reserves that typically depended on overseas visitors had to realign to attract domestic visitors when local lockdown regulations eased, but before many international airlines started operating.

“It’s crucial for private game reserves to survive because of the contribution they make to conservation. But it’s an expensive business, so we need to be creative and tap into new markets. It’s off a low base, but we certainly think the local fly-in safari market is one of these, particularly now that many European countries have again implemented travel bans.”

Shamwari has a 1,2km compacted gravel runway in the reserve less than 3km away from Long Lee Manor. For fly-in safaris, it provides a bespoke service, where guests are collected from the steps of the aircraft and transferred to the lodge .

Shamwari re-opened two of its seven lodges in mid-September 2020, with offers designed to appeal to domestic visitors. The newly refurbished Long Lee Manor is now priced at R4 150 per person per night sharing. The rate includes meals, and the only additional costs are the conservation levy, beverages, spa treatments, and laundry. From 21 December for the peak period, the rate is R4 750 per person per night.

The exclusive five-bedroomed Sarili Private Lodge is available to families and groups of friends for R38 000 a night. This includes meals, a bespoke itinerary, and a private staff including a personal chef. From 21 December the rate is R44 000.

Families with children staying at Long Lee Manor or Sarili have access to Riverdene Lodge’s vast adventure playground, with rope walkways, climbing walls, slides, and ziplines. The facilities are color-coded according to age and ability.

Sindile, the flagship tented camp is ideal for couples. Domestic rates are R8 000 per person per night sharing and in addition to meals also includes selected beverages.