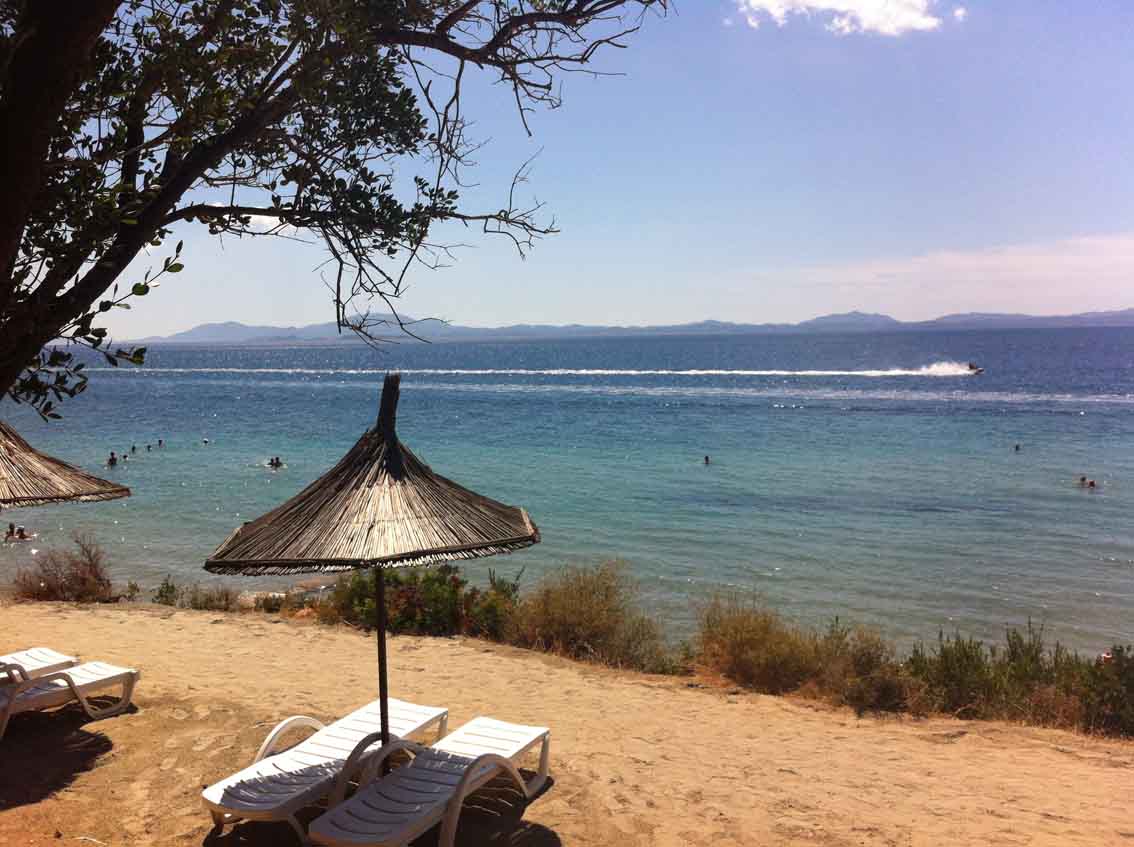 Why visit the birthplace of King Zog and Stalinist dictator Enver Hoxha, who shut the country off from the rest of the world for four decades? Why not?

Albania, on the western side of the Balkan Peninsula bordered by Montenegro, Kosovo, Greece and Macedonia, and 72km from Italy, offers sandy beaches, great food, UNESCO world heritage sites, a 300,000-year history and 300 days of sunshine. Albania only opened up after the fall of communism. One of Europe’s undiscovered tourist hotspots, it still suffers from the negative impacts of Albanian gangsters who trafficked people, and a disastrous financial pyramid scheme that brought the country to its knees.

It’s still corrupt, but if you’re only going for a week, it’s a recherché and niche destination. It’s safe for tourists, and people are helpful even when you can’t speak Albanian and they can’t speak English.

My introduction began at Saranda, a 30-minute ferry ride across the Ionian Sea from Corfu. The lively port suffers from the growing pains of an unregulated and developing market – too many package-holiday style hotels. But the country does have an outstanding coastline. Once you know where to go, and what to order, it can be a unique foodie experience with culinary influences from Greece, Italy and 500 years of Ottoman rule.

Albanian wine can be unexpectedly delicious. Both red and white Cobo (pronounced Chobo) are as good as many Italian varieties.

Albania has a history of religious tolerance, and in 1967 it became the first and only constitutionally atheist country to exist. Mother Teresa is the most famous Albanian born in Skopje, Macedonia, which was once part of Albania.

During World War 2 European Jews found sanctuary in Albania. A country with a population of 3.3 million, 30,000 Albanians died fighting the Nazis. In the centre of Saranda lie the remains of a 5th century synagogue.

The first night we drove to Gjirokastra, a UNESCO world heritage site, known as the City of Stone, a perfectly preserved 13-century Ottoman mountain town and the birthplace of Enver Hoxha (pronounced Ho-jah).

Hoxha managed to get electricity across the country in 15 years. The rest of his accomplishments are more dubious. There is scant reference to him at the ethnographic museum, which was his home. The house sprawls across multi levels and its rooms are airy and large with artfully carved wooden staircases, ceilings, banisters and balconies.

The medieval castle dominates the town, and has panoramic views over the mountains, an armaments museum, and an American plane captured in 1957 at the height of the Cold War. Ismail Kadare, one of this year’s Nobel candidates for literature, was born here.

The first night I stayed at the Kalemi Hotel, not dissimilar in style to Hoxha’s house. Dinner was at Kujtimi, a small hillside restaurant serving local specialities. I ate the qifqi, lighter than air meatballs. In the morning, after great coffee, we headed off to Tirana, with a roadside stop for grilled corn – dry and chewy but good.

If you have a penchant for former Communist capitals, stop in Tirana for a day or two. It’s a mixture of Bishkek, Kyrgyzstan, possibly Istanbul, with a hint of Naples. The boulevards are wide and leafy. You can see Benito Mussolini’s influence in the government buildings from when the Italians occupied Albania during World War Two en route to Greece.

The National Museum has an evocative Socialist Realist mosaic on the outside, and the National Gallery, a prime example of early 60s architecture, is full of Albanian Communist era art, which is worth seeing.

The Block is the happening spot. This is where Hoxha and his crew exercised their power and during that time only government officials were allowed within its boundaries, which is now full of trendy bars and restaurants. This is a coffee crazy culture, and every leading Italian brand is available, but Lori Caffe is Albanian. I had my first one at Juvenilja Castelo, right near the forest of love. In Communist times couples would head to the woodlands, people use its hilly paths as a place to jog or run as they did in the past.

Boutique hotels have appeared on the city’s landscape. I stayed at the Sokrat right near The Block. It is clean, efficient, with great apricot jam-filled cronuts (croissant-donuts) for breakfast, and excellent, strong iced latte. There are lots of stairs, but staff is friendly, helpful and accommodating, which makes up for any deficiencies. When it comes to Albania’s service industry, there is still a way to go.

Two hours from Tirana at Dhermi is a 12-century monastery with magnificent frescoes of icons. Shen Meria is worth a stop as you drive along to the coast.

A further two-hours over the mountains, the sapphire blue waters turn paler when the Adriatic meets the Ionian sea, and swaying palms, isolated rocky coves and inlets dot the coast. The beaches from Saranda to Vlore offer the best of the Albanian Riviera, a combination of Greece, Italy and the south of France, and every bit as beautiful. One of my favourites was Llaman. It’s smaller, quieter, and classier than the trendier Dhermi resort.

Eating is a big part of the culture and there are great bars and restaurants to sit and watch the world go by. We spent a week in Albania, exploring several beaches, including Ksamil. While the natural landscape is undeniably beautiful, towns lack sophistication. The food was largely terrible no matter where we went. However, the hills and mountains provide a fabulous backdrop, and the sea is warm, clean, and picturesque.

There are so many extraordinary beaches, coves, and islets but one outstanding discovery was Pema e Thate. We found a secluded part of the sandy beach with blue warm water, far from the music and the inevitable screaming of children on holiday. You could stare for hours at the islands and water that drifts off into the endless horizon.

We stayed at the Hotel Villa Park Bujani in Ksamil village. It’s clean, popular, although the plumbing is Stalinesque, a syndrome that pertains to the décor and local architecture too.

Located about 10 minutes drive away is Butrint National Park, an amazingly preserved ancient town, and another UNESCO site. It is astounding to think that Julius Caesar arrived here in 44BC and Virgil gave an account of it in his epic poem, The Aeneid. They say in Albania that there is a historical site every 1500 metres. Sad to think so much gets looted.

We barely touched all there is to do, which includes visiting the Albanian Alps, going white water rafting, horseback riding, and hiking.