Around 2600-miles north of its Patagonian tail, the Atacaman head of serpentine Chile snakes into Bolivia, Peru, and Argentina. Stripped down to shape and shadow, this desiccated Disneyland lures adventurers, archaeologists, and astronomers alike.

From Santiago, take a two-hour flight to the mining town of Calama, where copper freight trains traverse the tracks like rusty centipedes. Choose a window seat to watch the sinking sun fling a blanket of stars over the sleeping Andes from the Pacific Ocean.

There’s little reason to linger in Calama, where the dry heat smacks your face and the indolent dust seldom settles, so take a bus or hire a car and drive 65 miles southeast to San Pedro, where adventure merchants line the streets to offer daily desert excursions. The locals call themselves Atacameños rather than Chileans, Peruvians, or Bolivians, and speak their own language, although Spanish, and even English, are understood.

Those psychoactive agents must have been potent, judging by the depictions of human hybrids with avian or feline characters engraved on gold and copper artefacts.

These belonged to Lake Titicaca’s Bolivian Tiwanaku tribe that ruled the region from AD400 to AD1000. The Sacrificer ‒ axe in one hand, severed head in the other ‒ was another popular motif. Death likely came quickly but not so much for the sacrificial Peruvian Inca children buried alive to appease the sun god.

Sprawled across 17 hectares of the Ayllu de Larache plain, once home to an Atacameño community, Explora Atacama’s open-plan eco-lodge overlooks the Licancabúr Volcano that emits occasional puffs of contemplative steam. Locals in masks and costumes perform traditional death dances in the quincho (boma) and sleek horses are available for outrides. You’ll be tempted to chill at one of their four pools with brief forays into the steam room and sauna, but a monsoon shower in your room after sandboarding down curvaceous, hot-tempered dunes is equally rewarding.

At the Ahlarkapin Observatory, astronomer guides use laser pointers to walk visitors through the pristine night sky. Marvel at the Milky Way through a powerful telescope that also reveals the glittering red, blue, and white stars of the Jewel Box, Saturn’s ring, and three of its 60 moons. Thrilling!

Over the centuries, windblown sand covered and protected the walls and circular dwellings of the 2800-year-old village of Tulor. An Explora guide ‒ all excursions are included for guests ‒ explained how the volcano-worshipping inhabitants ritually buried their dead in the middle of each hut. Here, huge earthenware jars dug into the ground perfectly preserved the bodies. Atacaman mummies not only pre-dated their Egyptian counterparts by more than 2000 years but were also found to be in much better condition due to the hyper-arid atmosphere of the world’s driest wilderness. 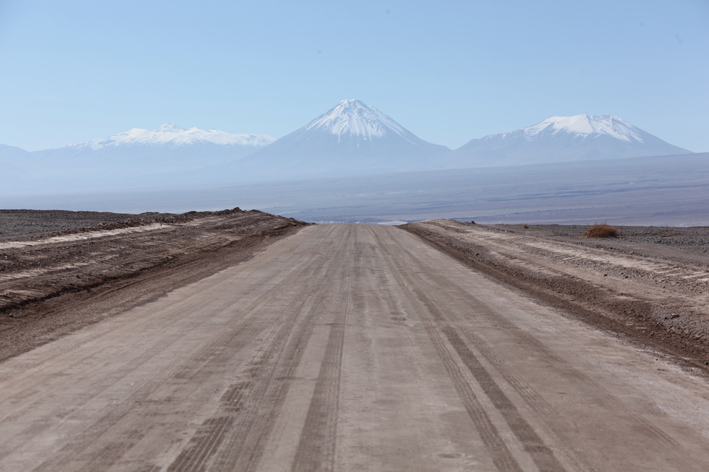 About 30 miles south of San Pedro, volcanoes circle the salt flats of the Salar de Atacama, a 280 square mile basin that quivers with life. Lizards laze on the fossilised rocks as water birds ‒ among them, the Andean avocet and three flamingo species ‒ thrive on little pink shrimps wriggling in the brine.

Protect your feet with flip-flops or rubber shoes to enjoy a dip in the turquoise waters of the Sejar Lagoon, as spiky salt crystals encrust the shoreline and lagoon bed. You’ll be as buoyant as a wine cork even if you do emerge from the water feeling like a salted cod!

Reserve another morning to watch the sunrise through several hundred swaying plumes of spectral steam at the geyser fields in El Tatio. They lie 12, 900 feet above sea level at the base of the Andes, a two-hour bumpy bus ride from San Pedro.

Drink in the snow-streaked peaks from your car window. You can walk around on the roof of the world in the nearby Andean meadows.

Valley of the Moon

Sodium chloride leached from the former salt lake created The Moon Valley’s otherworldly landscape of lunar-like craters, crumpled canyons and wind-swept pillars, the most iconic being the Tres Marías (Three Marys.). Gypsum crystals glitter red in the sunset, arguably the best time to visit. Nearby, the Cuevas de Sal Cañon, salt caves that resemble cascading stone waterfalls, are worth a look. Explorations involve a tight squeeze in some dark places so if you’re claustrophobic, you might prefer to bargain for exquisite llama wool scarves and colourful canvas bags at the village market instead.

Just 4km west of San Pedro, Death Valley’s unforgiving ridges and cracked earth ensures that nothing survives in its flinty surrounds. If the heat doesn’t defeat you, hire a bicycle and ride around the area, or you can succumb to that Pisco Sour craving that sings like a Siren from every bar.