Irish adventurer Sir Percy FitzPatrick’s life was less rich tapestry and more well-worn carpet covered in dog hair. Like Jock, his fearless bull terrier, he left his widowed mother as a young pup and rose from runt to robust paladin.

Popular with the ladies, he was a man’s man too, cracking yarns around campfires under Lowveld skies, the narrative enhanced by a shared bottle of whisky. He could carry a tune and played a mean concertina. The epitaph on his Eastern Cape grave reads: “A man men could but love – Pioneer and Patriot.”

Sir Percy introduced trout into the Transvaal, dabbled in politics and helped start the Johannesburg Zoo. Jailed for sedition in 1896, he spent much of his time writing, when he wasn’t receiving visitors. Mark Twain popped in, as did the touring British cricket side. Jail wasn’t quite as strict in those days. Prisoners were allowed an hour’s bicycle ride through Pretoria city in the afternoons with a police officer and two mounted constables in tow.

FitzPatrick later headed up the Chamber of Mines, got knighted, elected to parliament, founded a newspaper and served as President of the Transvaal Cricket Union, but he’s best known for Jock of the Bushveld, a literary tribute to his canine companion.  First published in 1907 it underwent countless reprints and translations, even hitting the big screen as a successful movie and sequel by producer-director Duncan MacNeillie, who turned it into an animated series.

FitzPatrick’s good friend Rudyard Kipling persuaded him to write about the four years he spent with Jock as a transport rider on a supply route along the Old Delagoa Road through the interior to Mozambique.

“If you can battle crocs, baboons and villainous Afrikaners; and live to tell the tales of the veld. Then write it down and make a buck, Sir Percy,” he might have said.

Jock of the Bushveld waymarks point out the original supply route. There’s one on the Malelane-Skukuza road, a second near Fihlamanzi, and a third at a parking spot overlooking the Crocodile drift on the Malelane-Crocodile Bridge road where Jock, Fitzpatrick and Jim Makokel, his Man Friday who liked a drink, fought an old crocodile.

Jock was long dead by then – “spoiler alert!” – shot in Mozambique protecting a hen house. I still can’t read the book without shedding a tear or two.

A bronze statue of Jock challenging a sable antelope can be found at Jock’s Safari Lodge between the Kruger Park’s Skukuza and Malelane gates. Fitzpatrick’s descendants, the Niven family, built the lodge close to where Sir Percy and Jock had their adventures. The 6000-hectare private concession area is in the shape of Jock’s profile and the property’s southern boundary is the original wagon route traversed by Sir Percy and his cohorts.

Perched amid the tangle of bush at the confluence of the Mitomemi and Biyamiti rivers, Jock’s Lodge remains faithful to the FitzPatrick ethos, albeit with all the air-conditioned expediencies of 21st century luxury.

On our last game drive ewe saw a leopard cub catching the last rays of the sun on a rock beneath a tree. His mother stretched along a branch above guarding an impala carcass.

Perhaps Sir Percy expressed it best: “The wilderness not only speaks for itself but for millions of others all over the world. Such is the friendship between man and his dog. A friendly touch, a placid glance, a simple kiss and the silence of unspoken words told by their souls. If the world could but remember to find the unspoken wilderness in each other, Jock would rest in everyone’s souls.” (December 24, 1883) 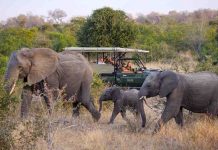