I blame myself for leaving the travel arrangements to my husband and his Egyptian friend Ahmed, whose brother Tarek had a boat. Of course, he did. Whether you wanted a carpet, camel ride, some perfume, or a tourist guide, Ahmed had a relative for every eventuality.

In fairness, I was too ill to protest. Prostrate before the porcelain, felled by a falafel purchased with reckless abandon from a street vendor on Luxor’s East Bank where Karnak’s columns reduce visitors to ant-sized proportions, I was ready to meet Amun Ra in the afterlife.

I didn’t think I’d make it back to bed, let alone Aswan with Tarek, my husband’s colleague Casper, and his young Sudanese bride. Casper’s daily ensemble of African-print suits and rubber-tyre sandals clashed ludicrously with his red beard and freckled hairy legs but clearly his wife was too shy to say so. She barely said a word to anyone.

Some river cruise vessels are fit for a pharaoh, but Tarek’s boat was not one of them. His was a shallow-bottomed barge with a torn sail. Our cabin featured two hard bench-like beds, a blocked shower drain, and walls so thin that Casper’s explosive reaction to some bruised figs put out by way of a welcome, made sleep impossible.

Red-eyed, pale, and desperate for fresh air, I settled on the torn upholstery of a plastic sofa on deck the next morning, congratulating myself for dodging the fruit basket.

Feeling hot breath on my neck, I turned to find Tarek ogling my chest with all the keen-eyed focus of an entomologist examining a rare scarab.

Baksheesh?? The nerve of the man!

‘I’ll give you a tip,’ said I. ‘Baksheesh is a mark of satisfaction to be given after ‒ and never before ‒ services rendered. So far, let me tell you, I am less than impressed with you and this tub you call a dahabiya.’

Unfazed by my rebuke, he continued to leer at my breasts as though I was a cash cow waiting to be milked. Furious, I stomped back into the cabin.

‘Why does Tarek ogle me so rudely?’ I fumed.

‘He thinks you’re a tart,’ shrugged my husband. ‘Don’t worry about it’

Loud ‘hello, hello, hello’s’ interrupted our argument. A horde of vendors on a fishing boat hooked to the side of Tarek’s vessel clambered on deck, hawking plastic pyramids. More of Ahmed’s brothers? My husband had the grace to laugh.

Look, it wasn’t all bad. The sight of the burnished Theban hills about 30 minutes outside Luxor, home to the terraced temple of Hatshepsut, the Valley of the Kings, and Tutankhamen’s tomb, was good.

We saw a man in a flowing robe talking into his cell phone from the back of his donkey, people washing at the water’s edge, the minarets of mosques piercing dusty skylines … and some spectacular sunsets!

We stopped at the Temple of Edfu, dedicated to Horus, and paid homage to old reptiles at the ruins of Kom Ombo, a temple devoted to falcon-god Horus and crocodile-god Sobek, about an hour outside Aswan.

The site of Gebel el-Silsila – a boulder balancing atop a rock pinnacle between cliffs of Nubian sandstone and limestone, quarries that once supplied ancient Egypt with building materials, made the invisible bond between past and present almost tangible.

It was as we approached Aswan that the sounds of a scuffle broke out on deck. We looked around to see Casper land a left hook to Tarek’s jaw. ‘Touch my wife again and see what happens,’ he yelled!

I wanted to applaud.

‘Now there’s a man unafraid to stand up for his wife,’ said I to my husband. 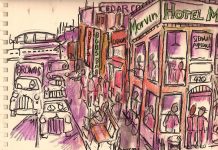