What do Robert Mugabe, the Dalai Lama and Snoop Dog have in common? They’ve all sat – sunny-side up, natch  – on an Egg Chair at Radisson Collection Hotel Royal Copenhagen

Danish design maestro, Arne Jacobsen hatched The Egg in 1957, a minimalist ovum that resembles a broken shell vacated by a fledgling. Designed for The Royal, which opened in 1960, the Egg cracked the nod in homes, offices, clubs and airports around the world, starring in several Hollywood movies and cradling the buttocks of the rich and famous.

Egged on (sorry!) by the success of his prototype, Jacobsen followed up with another cult classic, his curvaceous Swan chair (1958) with armrests like the partly furled wings of the eponymous waterfowl.

Apart from the success of earlier Ant chair, (1952), Jacobsen’s ubiquitous Series 7 achieved fame when call girl Christine Keeler posed naked astride a copy of one during Britain’s Profumo scandal in 1963. Only the chair emerged from the unsavoury revelations with any credibility.

The Royal is a living tribute to Jacobsen. Every detail of the high-rise monolith, from its steel and glass walls to its lamps, coffee pots, teaspoons and door handles was specified by the godfather of Scandinavian design.

The portly, pipe-smoking Jacobsen was a reclusive architect who rarely left his Copenhagen studio and preached proportion. “It’s the fundamental factor,” he reflected months before his death in 1971 aged 69. “The most admired buildings … are all well-proportioned.”

Room 606 has been maintained as a Danish Modern time capsule left exactly the way Jacobsen arranged it.  I found it a tad drab and austere.

Opposite the dining room, across the vast marble-floored lobby furnished with Egg and Swan chairs, a spiral staircase floats up to the conference floor. Revamped in 2018 but retaining its retro modern décor, The Royal is fit for a queen. 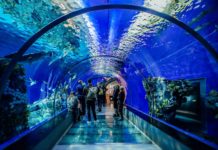 Averting a crisis in St Lucia

10 things to do in San Francisco