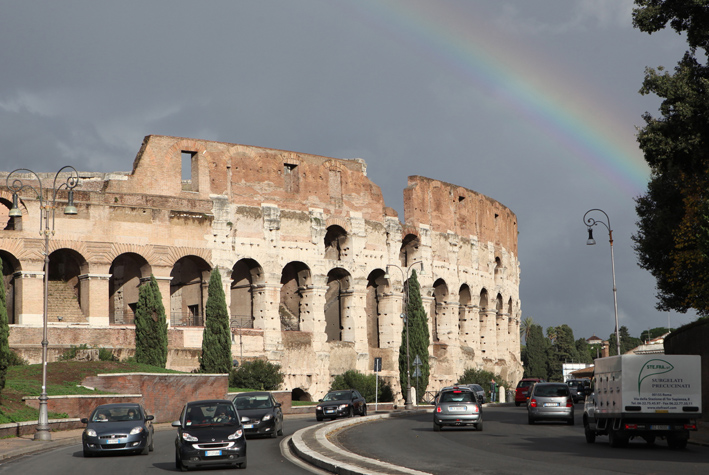 For more than 1000 years, with the blessing of the Roman Catholic Church, builders regarded the city’s baths, temples, monuments, and artefacts as marble quarries

Is there any city more blessed than Rome? How could there be? It’s home to the headquarters of the richest, campest, most decoratively over-the-top religion ever conceived. Pope Francis lives here, after all. I visited his casa in the Vatican City but he didn’t wave from the window. Clearly he had other salted sea bass to fry.

No matter, I found the light anyway. It happened as I gazed open-mouthed at Michelangelo’s Last Judgment, a vast fresco in the Sistine Chapel. All the treasures of the Vatican – the ancient maps, the gold, alabaster statues, paintings, tapestries, courtyards and marbled floors – paled in comparison.

It’s thrilling to loiter where the great artist himself must have stood to survey his handiwork. Next time – and there will be a next time because I threw three coins backwards into the Trevi fountain – I’ll bring binoculars.

Michelangelo had a problem with the frescoes being 21 metres above the floor. When he took down the first stages of scaffolding, he realised he had painted The Sacrifice, Flood and Drunkenness of Noah (who knew?) too small and so changed the scale. The figures in the second half of the ceiling are noticeably bigger and freer. This is the section that includes God reaching out to touch Adam’s finger.

With more than 300 semi-clad figures writhing about in a colourful maelstrom – you can even see up God’s pink nightshirt as He flits about (sonder onderbroek ) – it’s no wonder the ceiling caused such an unholy row when first unveiled in 1512. One pope, on seeing the naked bodies, dropped to his knees and prayed not to be sent to hell.

So appalled was the 19th century art critic John Ruskin by the “bathroom of nudes” that he called Michelangelo “the chief captain of evil in the Italian Renaissance”.

Truth is the great artist, who preferred sculpting, didn’t want the job in the first place. He refused the commission by Pope Julius II several times, but his holiness was not one to brook any argument so Michelangelo reluctantly began painting in 1508.

The ceiling was to depict the Christian story of human history, from God’s creation of the world to the time of Noah in 175 individual works, covering 3 657 square metres.

Michelangelo did not paint lying down. Enough room between the platform and ceiling enabled him to stand but he suffered from constant spasms and headaches because of the angle at which he had to crane his neck. For months afterwards, he could only examine drawings at a strange angle.

While Michelangelo wielded the brush, gossips had much to say about his sexuality. Paulo Romaniello, our Vatican guide from Trafalgar Tours, denied the artist was gay, but c’mon. The uniforms he designed for the Swiss Guard – tasselled accents, yellow and blue striped leggings and red cuffs – are camper than a row of hot pink togas.

In contradiction, our guide in Florence told us The David statue’s face and penis was based on that of Michelangelo’s lover, Tommaso Cavalieri, a nobleman 40 years his junior. Referring to The David as “my fiancé” – she must get stonewalled a lot – she cited his uncircumcised penis (the real David of Goliath fame­­­­ was Jewish) ­ and heart-shaped pupils as proof of Michelangelo’s homosexuality. Then there were the letters the artist wrote to Tommaso. “May I burn if I do not love thee with all my heart, and lose my soul, if I feel for any other!” is just one extract.

For sure he was sexist, declaring in a sonnet that no woman “is worthy of a wise and virile heart”. And he was such a bitch! On completion of Bartholomeo Ammannati’s statue of Neptune, which looks directly at The David at the Piazza Della Signoria in Florence, Michelangelo said: “Oh, my dear Ammannati, you’ve ruined a perfectly good block of marble!”

All the artist’s muses were (very young) males, so perhaps it’s no surprise he never married. “My wife is my art and my works are my children,” he told a friend.

Certainly he approached the Sistine Chapel ceiling with monastic devotion, going without food and sleep for days at a time. Neither did he avail himself of the Roman baths. According to Paulo he stank to high heaven. He wore the same pair of dog skin stockings for months on end. On his death in 1564, aged 89, Michelangelo was buried with his boots on as nobody had the stomach to remove them.

Despite all this, Pope Julius II grew impatient and threatened to have the artist thrown off his scaffolding if he didn’t complete the ceiling faster, even beating him with a stick. To express his feelings towards the pope, Michelangelo painted his own face on the flayed skin held by Saint Bartholomew in The Last Judgement. Drama queen? You decide …

About a 10-minute walk from the Sistine Chapel, is St Peter’s Basilica, the largest church ever built, on the hill supposedly where Peter was crucified and buried.

You have to go through an airport-style scanner to see Michelangelo’s Pieta sculpture of the Virgin Mary holding the crucified body of Christ, now kept behind glass after being attacked by a man wielding a hammer in 1972. If you ask me, he got fed up being jostled from all sides by the crowds. You’ll never walk alone in Vatican City!

Later, Paulo took us to see the Colosseum, which towers over the Temple of Venus like a humungous stone skeleton. Even in its ruined state, it’s easy to imagine the riotously hardcore events staged there 2000 years ago when a huge retractable canopy made from ship sails and operated by sailors served as a roof.

Lions and tigers, Paulo told us, were starved for three days to make them fiercer. Condemned prisoners were forced to perform for the multitudes and told to act out the legend of Orpheus, who could tame the wildest beasts by the power of his music. Each prisoner would be told to sing or play a lyre to calm the lions down. Of course it never worked.

Even women fought as gladiators in those days. Paulo showed us a mosaic fresco that depicts two women killing a tiger, each armed with a small knife, or gladius.

For more than 1000 years, with the blessing of the Roman Catholic Church (which had a share in the profits) builders regarded the city’s baths, temples, monuments, and artefacts as marble quarries. The Colosseum is the hulking ruin it is today because for hundreds of years people knocked chunks from it with sledgehammers. When Bernini needed bronze to build his sumptuous baldacchino in St Peter’s it was stripped from the roof of the Pantheon.

It’s a wonder any of ancient Rome survives at all, but thankfully much of it does and visiting the Eternal City is like being in a vast 3000-year old museum. Sadly though, there’s nothing old-fashioned about the prices. We paid 20 euro for two small cups of coffee at a sidewalk café.

Revenge of the cupcakes